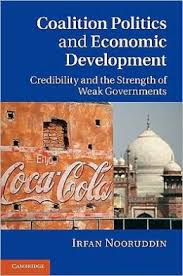 “Democracies are often portrayed as good for human freedom but a constraint on economic growth, as contending parties and interest groups fight over resources and checks and balances delay difficult policy choices. Nooruddin casts doubt on this skeptical view, showing that incorporating diverse interests – which only democracies can ultimately do – restrains bad decisions, encourages investment and curbs economic volatility as a result. An important contribution to the literature on institutions and long-run economic performance.”
– Stephan Haggard, Krause Distinguished Professor, University of California, San Diego

“Coalition Politics and Economic Development explores the determinants of macroeconomic volatility across countries. In this book Irfan Nooruddin constructs a novel theory and a rigorous set of empirical tests at the national and subnational level to explore this important substantive question. This book is a major contribution to the fields of international and comparative political economy.”
– Nathan Jensen, Washington University, St Louis

“Unlike so much political economy work that looks at the political determinants of high or low economic growth rates, this book focuses on growth volatility as the dependent variable. Nooruddin’s explanation zeroes in on decentralization of policy-making authority as a deterrent against growth volatility. The more unchecked the policy-making authority is, the greater is the possibility of policy reversal. Nooruddin is not recommending the virtues of gridlock, but those of checking executive authority. An unchecked dictator is worse than authoritarianism per se; a democracy with one-party hegemony is worse than democracy per se. The argument is tested with great statistical sophistication, and intriguing case evidence is provided. Counter-intuitive, captivating and almost certain to generate a lively debate.”
– Ashutosh Varshney, Brown University

“Nooruddin makes a provocative claim – when many actors are required to agree for change to occur, policy stability is likely, which investors like. In a sense, Nooruddin is a modern-day Madisonian with some important twists: (1) multiple factions are good not just for stability but also for economic growth; and (2) the best way to organize multiple factions is through minority parliamentary government. The theory and evidence are compelling, and the book is a must-read for all interested in political economy.”
– James Raymond Vreeland, Georgetown University and author of The IMF and Economic Development (Cambridge University Press, 2003)